The EGCDF since its inception has brought smiles on the faces of community members through execution of laudable infrastructural and non-infrastructural projects which cut across various sectors including; health, education, housing, water scheme, social, economic, transportation etc. During the last AGM, it was reported that the Foundation completed 116 infrastructural projects. It should be noted however that the number of projects completed have increased to 123 following the recent commissioning of seven major projects in both kingdoms.

Among the projects awarded in 2016 and 2017, seven were completed and commissioned on the 30th and 31st of October, 2017. The commissioning ceremony was graced by government functionaries including the representative of the Honorable Minister of the Ministry of Niger Delta Affairs, the Delta State Governor His Excellency, Senator Dr. Ifeanyi Okowa represented by the Chief of Staff – Honourable Tam Brisibe, Rt. Hon. Daniel O. Reyenieju Rep. Warri Federal Constituency, representatives of the revered traditional institutions of Egbema and Gbaramatu kingdoms and other dignitaries from all walks of life. 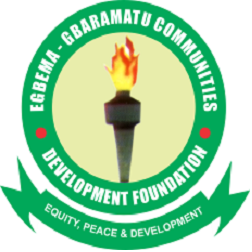 The projects commissioned are;

In the advent of the GMoU process, Chevron Nigeria Limited (CNL) transferred some infrastructural projects which they initiated and scoped to the foundation for execution with a paltry sum of money. Amongst the projects are the Tsekelewu and Oporoza cottage hospitals. Over the years, the Foundation had built in each of these hospitals out-patient department, staff quarters and blocks for male/female wards. Currently, the Foundation is putting a finishing touch on some aspects of the facilities in line with recommendations from Health Management Board to enable possible takeover by the State Government. Since inception of this administration, we have vigorously engaged the State Government at various levels to takeover and deploy personnel for the takeoff of the hospital projects as they will greatly address the prevalent health challenges in the Communities. It is a gesture that the State Government has honourably given a nod.

In an attempt to overcome the challenges of accommodation or office spaces for our Foundation members and staff, the leadership has resolved to put up a new structure within the secretariat premises. However, consultants have advised that the existing structures be amended to create more office space including event center of 500-seater capacity and other syndicates rooms as well as preserving the existing open space for parking lots and other activities. There is no doubt on completion of this enviable project, that it will add socio- economic value as well as boost the Foundation’s prestige. We are therefore considering embarking on this laudable project in phases subject to available resources.

In view of boosting our local economy and creating wealth for our rural dwellers, EGCDF has made concerted efforts to revamp the micro-credit scheme that has been stalled for some time with the engagement of the micro-credit committee to handle the recovery of funds disbursed to community members, especially as all efforts to engage the micro-finance bank officials in the recovery process did not yield desired result. In Gbaramatu axis, five cooperative groups benefited from the Seven Million Naira (N7,000,000.00) only from the purse of the scheme with recovery process ongoing, while the committee is at the verge of disbursing similar amount to potential beneficiaries in the Egbema axis. We therefore implore prospective beneficiaries to be dedicated to the refund as the successful repayment of the current disbursement will determine further funding of the scheme.

Egbema and Gbaramatu Communities Development Foundation (EGCDF) is poised to embark on a fresh skill acquisition scheme following the popular demand for more of the scheme by community youths. With this, the human capital development committee has identified gaps in vocational skills and have also explored viable training centers for effective commencement of the scheme as soon as the Board gives approval.

Recalled that twenty (20) of our youths were undergoing training in the Agripreneur scheme that was carried out by the Foundation in collaboration with CNL and the International Institute of Tropical Agriculture (IITA). The programme however had its setback following some internal issues between CNL and the facilitators (IITA). However, we are optimistic that the programme will soon resume in its full capacity. No doubt the program has fully started, and all participants are doing well in the area of plantain farming, fish farming, and other breed of farming at the foundation’s own land. The foundation urges those who are privilege to the training to put more effort to benefit from the scheme to better their lives. The training which will last for two years should be of immense benefits to participants from the kingdoms.

The EGCDF/CNL scholarship scheme comprises of secondary, tertiary, postgraduate (local and foreign) and PhD. This scheme has greatly increased the indigenes quest for education in both Egbema and Gbaramatu kingdoms.

The scholarship forms for 2017 was recently released and distributed to the various communities, 155 forms are for secondary schools and 100forms for beneficiaries of tertiary institutions. We encourage those who would be benefiting from this scheme to contact the education committee. It is of note that four tertiary institutions beneficiaries are currently on a First-class grade. We have proposed that any student with such performance shall be considered for automatic scholarship for the next level of study irrespective of the community.

Annually, EGCDF Awards 15 Local MSc and 4 PhD scholarships to deserving indigenes of both kingdoms. We are therefore appealing to the various communities who have not yet submitted their forms for the 2017 MSc and PhD to please do so.

The stream B overseas scholarship schemes have been fully utilized by all the communities. We wish to commend all those who have benefited for taking up the challenge in pursuit of foreign education. This administration will do her utmost best to ensure that the third round of the scheme commences soonest. We are happy to report here that recently, one of our beneficiaries EMMANUEL DOYAH from Polobubor community who studied Petroleum and Gas Engineering from the University of Salford, Manchester bagged a “Distinction”. We congratulate this beneficiary immensely and charge others to follow suit.

The partnership between the Foundation and Africa Eye Cataract Foundation has brought immense relief and hope to many of our community folks that could not have had easy access to an eye specialist as well as treatment for different ailments. The last round of the exercise was between October to December 2016 at Tsekelewu and Ogbudugbudu in Egbema kingdom while Kokodiagbene/Okoitoru in Gbaramatu kingdom and at the EGCDF Secretariat, Warri, in February 2017. A total number of one hundred and fifteen (115) persons benefited from the eye surgery/operation, one hundred and sixty-five (165) persons were given medicated eye glasses and six hundred and seventy-one (671) persons were treated of other ailments. Following the huge success recorded, the foundation shall be carrying out the next round during the first quarter of 2018. Meanwhile, our partner, Africa Eye Cataract Foundation magnanimously offered free treatment/eye surgery for thirty (30) indigenes of Egbema and Gbaramatu from 12th to 14th December 2017 in Benin City, to mark the Doctor’s Mother 90th birthday celebration.